Last week we went on vacation! We wanted to do a camping trip with some Winter Park friends and figured out we could do a 3 day rafting trip on the Ruby Horsethief section of the Colorado River. It crosses the border between Colorado and Utah just west of Grand Junction, CO. We took a ton of pictures so we decided to break it up into a couple parts for the blog. The other parts are How to plan a rafting trip and the Rattlesnake Canyon Hike.

First off, let us just give you the overview. We left on Wednesday evening and drove out past Grand Junction to our first campsite at the free Jouflas Campground in the Rabbit Valley Camping area. We all got to test out our gear and make sure we had everything we needed. 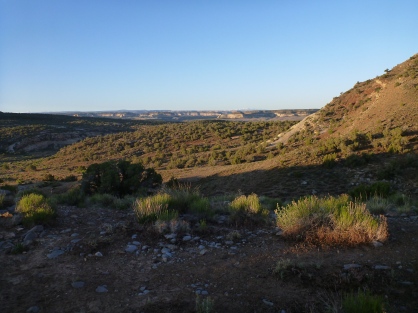 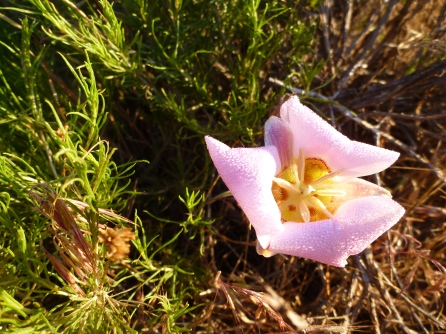 We had an amazing moonrise while we were setting up and bright nearly full moons for the entire trip. Flashlights felt very optional.

The next morning we woke up, set shuttle (meaning we dropped off a car at the end), and picked up our raft. We ended up renting a giant 18 foot raft with a cooler and dry box. We also brought some fun toys, like an inner tube. It worked out perfectly for our group of five plus our dog Cheat.

After about 6 miles of floating we came to Rattlesnake Canyon and most of us did a 5 mile hike while Allison relaxed and did some yoga (her leg is much better but still wasn’t up for a hike) and Cheat napped in the shade.

After the hike, we ferried across the river to the other side and our first river campsite, Beaver Tail 2. The site was amazing. Nice and large, very flat, shaded, and the most amazing hammock spot!

Later talking to one of the park rangers we found out that that site gets the worst bugs of the whole river, but this early in the year, the bugs weren’t bad at all. It was a really nice spot for us. The only thing we had to deal with was Cheat hunting toads. They are slow and fat and juicy and he learned how to catch them right away. Never mind that their skin is poisonous and it kept making him sick! For such a smart dog, he can be pretty slow on the uptake sometimes. (Don’t worry, he is fine, but we are lucky he is big.) 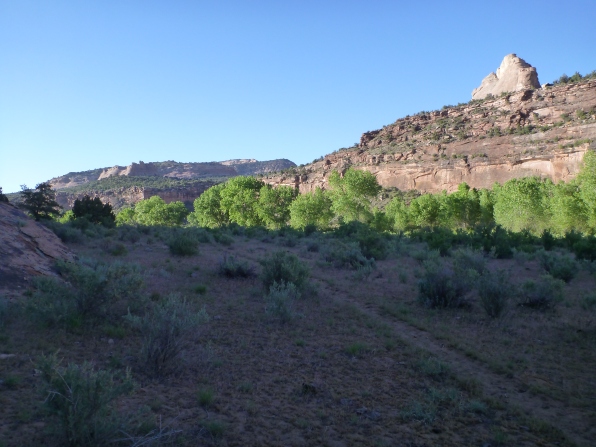 The next day was a slow-relaxing day. We got up late, ate some awesome breakfast burritos, played some chess and fooled around before hitting the river pretty late in the morning. 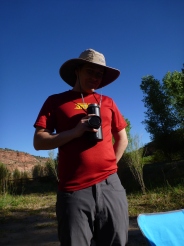 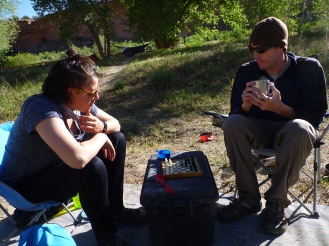 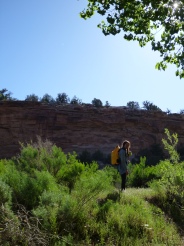 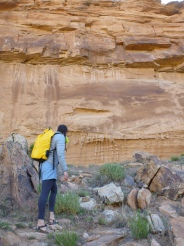 On the float that day, our map had mentioned an “Old Cabin” but we didn’t know anything about it; we still don’t really after visiting it. (Our map, if you’re curious, came from the bottom of this page which has a pretty good trip report and some of the most detailed maps we could find to print out). So around lunch time, we did our best orienteering and pulled over just a bit downstream of the old cabin. It had a serious The Hills Have Eyes vibe to it: 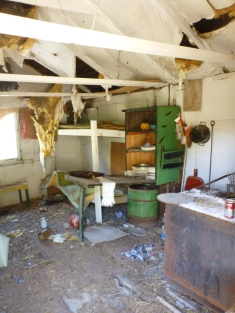 After a quick walk around we decided we’d all be much happier eating lunch back on the raft where we wouldn’t end up in a horror film. 🙂 It was prettier over there anyway. 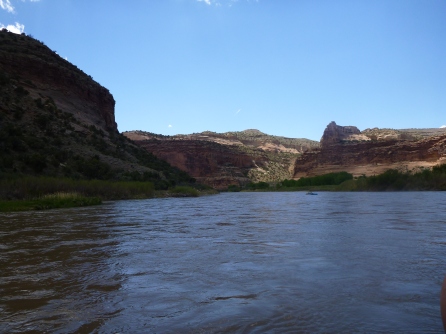 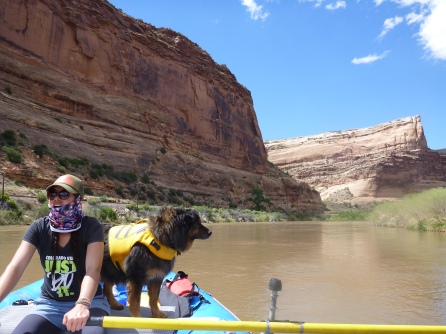 So after some more floating we came to our second campsite Mee 1. As soon as we pulled up on shore and started exploring the site we started having second thoughts about choosing it. The sand had been in full sun all day and there wasn’t much in the way of shade. Walking up the bank from the raft, it felt like it was 120 degrees. The site ended up being just fine once the sun went down and the views were pretty great, but it was pretty hot when we got off the water. And it was definitely better than Mee 2, 3 or 4 which had no shade at all. 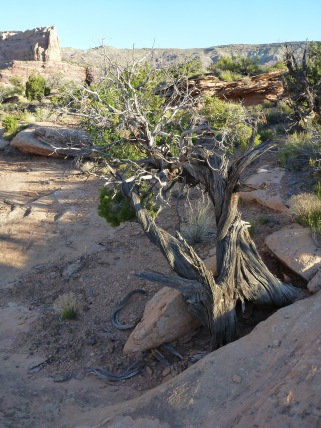 Fortunately we had plenty of time, so we set up some hammocks and chairs in the shade and played some games and made the most of it. 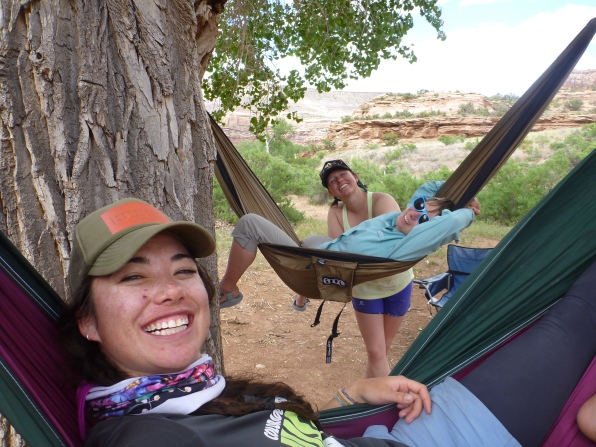 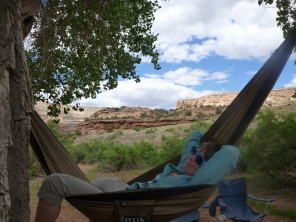 Once it cooled down we took a little hike down to Mee Canyon (the canyon in the center of the picture at the top of this post). Cheat got to go adventuring, we got to play in the water, and the scenery was amazing.

After dinner, the wind was really picking up and we were pretty tired so we set up our sleeping bags under the stars with the table as a wind block and had a wonderful night’s sleep.

The next morning the wind was howling. The weather reports we saw said ~25 mph sustained winds coming from the direction we wanted to go 😦 We had 13 miles to go that day so we got a super early start and were on the water before 9 am.

We floated down through the Black Rocks section and the only real “rapid” on the river. It was just a class II rapid with some large whirlpools but the wind made it so that as soon as we stopped rowing, we’d sit stationary or blow left or right. It made it the hardest class II rapid I’d ever run. 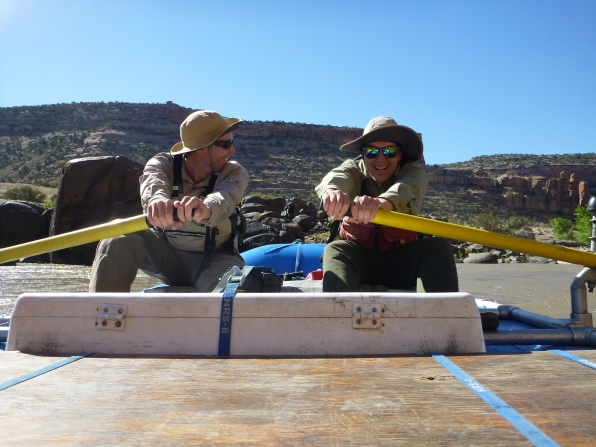 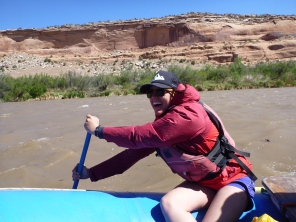 Fortunately we made it through without losing anyone.

After a lot more rowing and a quick stop for lunch, we made it to the takeout by 2 pm. We ran the fastest shuttle ever to get everything back to the rental place by 5 pm, grabbed some ice cream and then found another free campsite just south of Grand Junction with some great climbing and bouldering.

We had a great campfire while we finished off the rest of the alcohol and food.

The wind was still howling and we all wanted a little more rest so we slept in the cars that night which was a nice change of pace and drove the four hours home. All in all it was a great trip with some great people. A fantastic vacation all around! 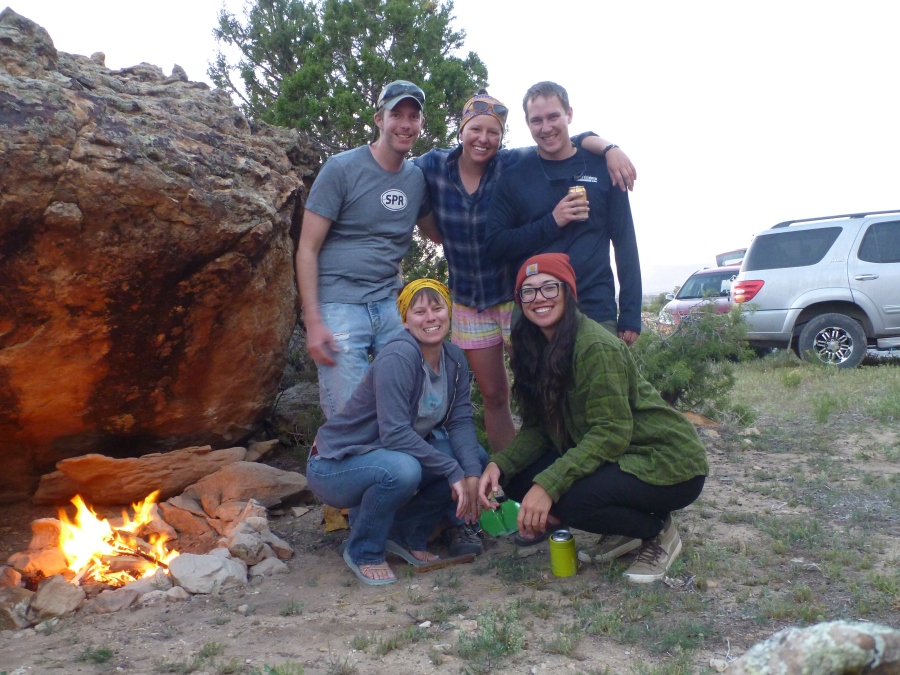 We’re planning a post on the Rattlesnake Canyon hike and on how to organize a river trip like this for yourself so stay posted. You can subscribe at the top on the right and you’ll get an email any time we post 🙂