This is going to be a big project and I’m totally going to nerd out about most aspects of it so I’m going to break it up into a few parts. In this post I’m going to try really hard to keep very high level. Hopefully Allison can even read this and know what I’m talking about when I start yelling that the doo-hicky doesn’t go in the widget. That being said, please forgive me if I end up too far in the weeds or if I don’t explain something that doesn’t make sense to someone who hasn’t spent the past 6 months researching it.

First thing, definitions. Let’s compare electricity to an old water wheel like you would have at a mill. 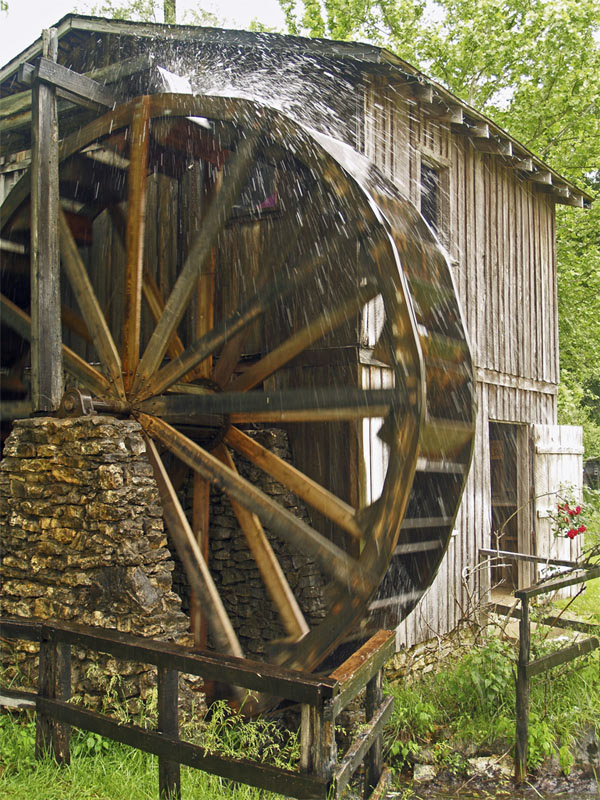 Electricity comes in many different forms and each is used for different things. There is Direct Current (DC) and Alternating Current (AC) and there are different voltages (V) of each. 12V DC is what your car uses. Some large trucks and most military vehicles use 24V DC instead. That round hole that used to be called a “cigarette lighter” is a 12 Volt DC socket. All batteries from little AAAs to the giant batteries in electric cars put out DC electricity. In the US, your house uses 110V AC (it is also known as 115 or 120 but it usually doesn’t matter). Our RV is going to need both 12V DC (for things like lights, charging the car battery, the water pump, the vent fans etc)  and 110V AC (for the air conditioner, the microwave, and all of the electrical outlets we’ll use for things like laptops and a TV).

In Europe most homes run 230V AC. Most of the power adapters you bring with you when you fly across the Atlantic do more than just change the plug shape, they actually change the voltage from 230 V to 110 V while leaving the electricity as AC. There are all sorts of devices that convert one type of electricity into another but the three main types are “converters,” “inverters,” and “transformers.”

Converters generally output a particular voltage of DC. Some converters take DC and output a different voltage of DC. One example would be a car charger for your phone. It takes 12V DC from the car and converts it into 5V DC for the USB port. Converters can also take AC and make DC. This is like a AA battery charger you plug into the wall, it converts 110V AC into 1.5V DC. Chargers are a special type of converter because they will output DC in a special way to efficiently charge batteries.

Inverters on the other hand will change DC into AC. If you have a normal household plug in your car, there is an inverter behind it changing the 12V DC of the car into 110V AC for the plug. Inverters have some of the most complicated circuitry of converters, inverters and transformers and are thus the most expensive. There are also two types of inverter, pure sine and modified sine. I don’t feel like going into the difference, but what you need to know is that pure sine is exactly like what comes out of your house plug. Modified sine is close but not close enough for most clocks, sensitive electronics (i.e. most laptop chargers), microwaves, motors like for power tools and induction heaters. Pure sine: expensive and perfect, modified sine: cheap but not perfect.

Lastly and least important for an RV, there are transformers. Transformers will convert one voltage of AC into another voltage of AC like the adapter you bring with you to Europe. They are simple, cheap and not needed at all in a US RV.

So lets talk about how our RV looks today. Here is a basic diagram with all of the major components that our RV has and a quick overview of how the system works.

One of many things you’ll note is that we can’t run any 110V AC things (like the computers we need to work) without either being plugged in or running the generator. We hate generators. They are terrible, noisy, smelly, expensive and not to mention heavy. We’ll have one for emergencies but our goal is never to run it. Being plugged in at a campground is fine but it would mean we’d need to be at a campground all the time. That would be non-ideal to say the least. So here is what most people with RV’s end up doing instead:

Everything runs through the batteries and you don’t need a hookup or to run the generator to use AC power because those loads run off the inverter instead. Granted most batteries, solar panels and inverters are completely inadequate to run an air conditioner for any amount of time so in most RVs the air conditioner is restricted to only run when plugged in or running the generator. I think our system is going to keep it like the picture though for a few technical reasons that aren’t worth going into.

Another difference is the battery meter. In cheap systems, you only get a volt meter to tell how much power is in the batteries. Generally 14.4 volts is full and 11.9 volts is really really empty but it can change based on if the battery is being charged, if there are any loads drawing power, how cold it is, and how old your batteries are. A smart power meter will instead measure every watt into and out of the batteries. You can program it with how large your batteries are and it will then give you a fuel gauge for your batteries with how much energy you actually have left.

Lastly the solar panels themselves. Solar panels output DC power over a fairly wide voltage range based on how sunny it is. The Solar Charge Controller is a converter which converts whatever voltage the panels are putting out into exactly what your batteries need.

Our system is going to be a little more complicated as I made some decisions based on “what quality parts can I get cheap from craigslist” but that is the basic gist of what goes where. As of tonight, I’m going to have all of the pieces except for the panels themselves and the connecting cabling so I’ll probably get started putting it all together after Thanksgiving.

Next up, check out our post on DIY RV Solar!