After the Grand Canyon, we went to Zion National Park. When we lived in Colorado, we had seen pictures of a number of our friends doing this awesome thing called canyoneering. The gist is, hike in the desert, find cool canyons, and then hike or swim or maybe even use ropes to rappel down them. Amazon Prime has a cool movie about it if you’re interested called Gorging. We both liked hiking and climbing and swimming and ropes and knots and rappelling so it seemed right up our alley. But it also sounded like a really easy way to kill yourself.

So we decided to do it the right way and for Allison’s birthday, I bought her (and myself if I’m being honest) a full day class with Zion Adventure Company to learn how to go off and do it ourselves. We were looking forward to the class but we also wanted to practice exploring in canyons. We had a couple days between arriving at Zion and taking the class so after work, we went for a trail run at the Red Hollow Canyon Trail and started at the bottom so that we wouldn’t get in too much trouble. 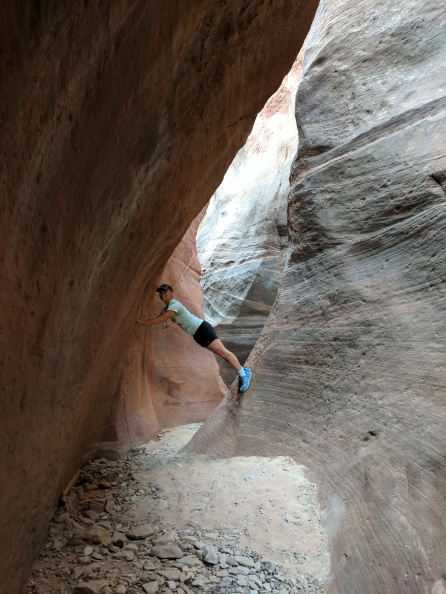 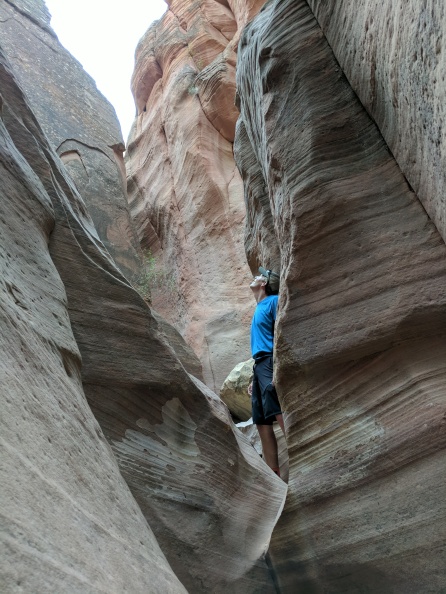 And we had a ball! One of the coolest parts was the fact that even though it was a “trail” there weren’t any trail markers. With all of the canyons we’ve done, there has been a ton of navigating with GPS and topographical maps and compasses just to figure out where to go which make it really different than other hiking.

So next up was a trip that had been a recommendation from our Antelope Canyon tour guide, Buckskin Gulch. Buckskin Gulch can be done as a backpacking trip for 14 miles but we decided to just do an out and back trip to some 800 year old petroglyphs. 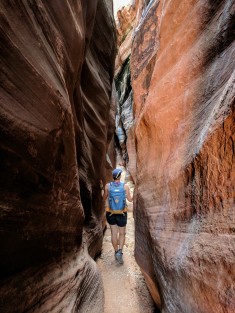 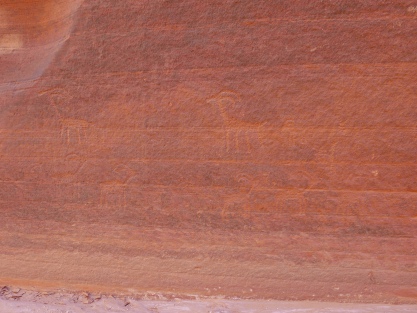 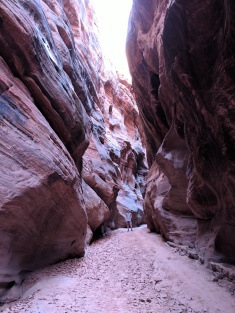 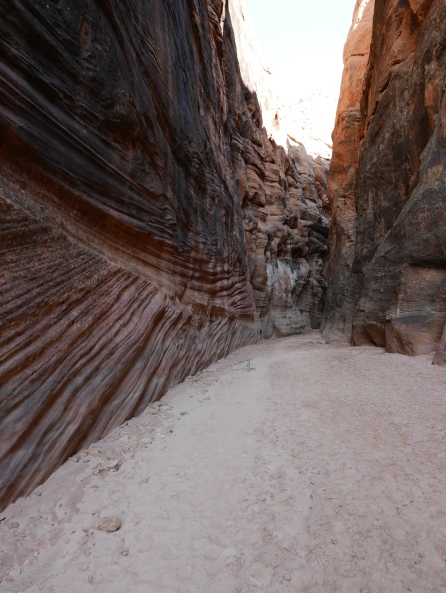 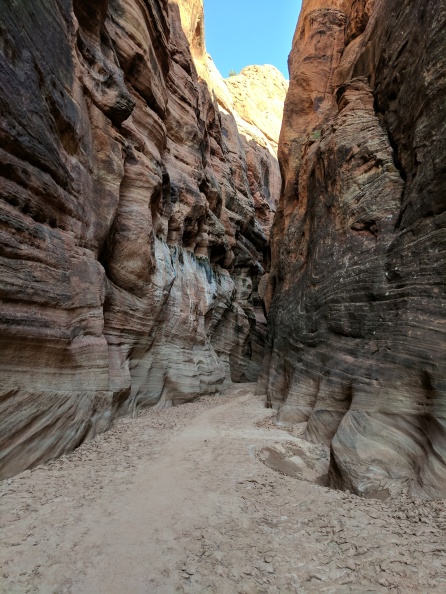 And it was awesome!!! The scenery when canyoneering is unlike anything else we get to see on normal hikes. The walls give you a feeling of age and depth that you don’t get climbing up a mountain. We also learned that traversing any canyon involves a lot of problem solving. In Buckskin Gulch there was a 10 foot drop that we had to figure out 1) if we got down it, could we climb back up? And 2) how we could climb down it. I’d say we were hooked on this sport before we even took the class to learn the technical aspects. But we were still really interested in learning more about the ropework and rappelling. Especially when we got to do stuff like this: 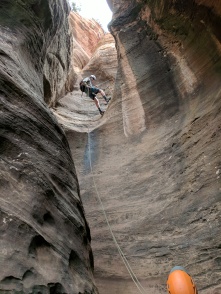 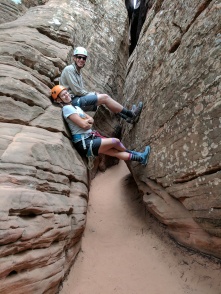 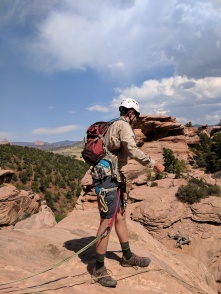 One of the coolest parts of the class was that the day after the class, we could borrow all of the gear and go do our own adventure in Zion National Park. So we got to go wild in the beginner friendly Keyhole Canyon. 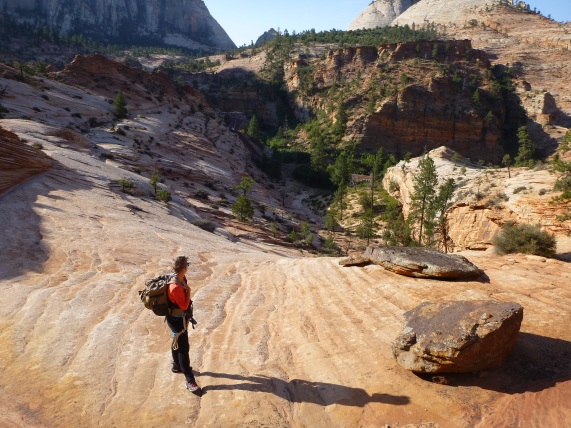 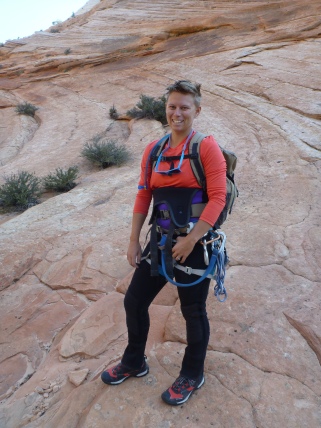 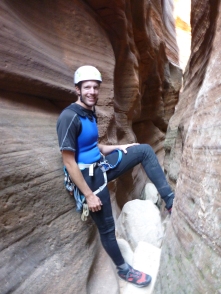 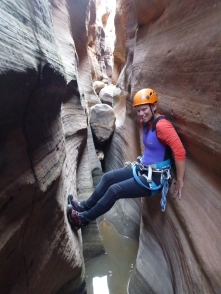 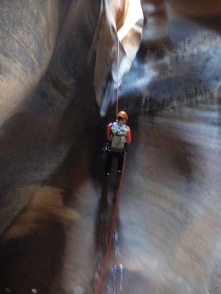 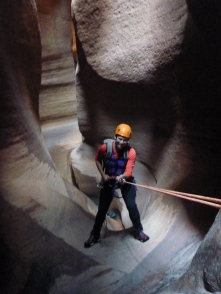 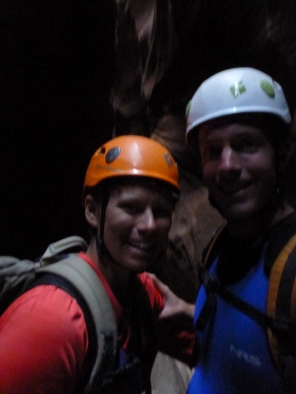 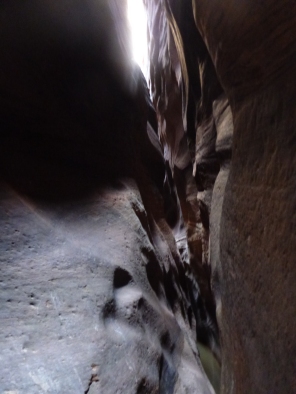 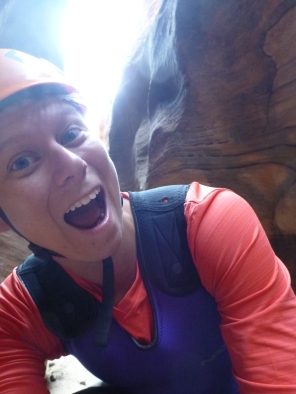 Keyhole was impressive. The way the walls overhung the bottom, it really felt like we were sinking into the bowels of the earth. The navigation skills were definitely needed to do the approach hike (you can see Allison looking down the approach hike back towards the cars in one of the pictures above). The problem solving also continued with our first “pot holes” which are places where rushing water digs out  a bowl shaped depression in the rock that you need to figure out how to either go around or climb in and out of.

But by far the coolest thing about canyoneering that we learned on this trip, is that it gets you away from the crowds. Zion National Park gets over two million visitors a year and almost all of them during the summer. The park road is so busy they close it during the summer and make it bus accessible only. The entire rest of our time in Zion was filled with people (including the normal assortment of ignorant, rude and inconsiderate people you get in National Parks). But when canyoneering, from the time we left the car, to the time we got back, we didn’t see a soul.

Since that time in Zion, we have gotten all of the gear and have done 3 trips to canyons in Arches National Park. All of those amazing parts of this sport still apply. The navigation, the hiking, the beautiful views, the problem solving, and the lack of people all come together to make for an amazing experience every time. You’ll have to wait for another post for the pictures from those trips though. 🙂

2 thoughts on “Learning how to go Canyoneering”