While we were staying in Santa Fe, I was talking on the phone to my grandmother who mentioned that when they were visiting the area a few years ago, they stopped by some museum about the atomic bombs and nuclear stuff. That sounded really interesting so I did some googling and found the National Museum of Nuclear Science and History. Allison and I had a spare weekend day waiting to give our car back to the mechanic-who-won’t-be-named on Monday so we decided to head down and visit. Really, I got super excited about this museum and demanded the car for the day to go see it and Allison graciously agreed to come with me. She’s the best 🙂 .

Overall the museum is separated into a handful of different exhibits that depict how we use nuclear energy for medicine and electrical power, a large area walking you through time from producing the first atomic bombs through the Cold War, and an outdoor area that had some amazing pieces of real bombers and ICBMs (intercontinental ballistic missiles).

The non-bomb areas were neat. There were a number of early x-ray machines including this one that fancy shoe stores would use to let salesmen see how the bones of your feet looked so they could theoretically choose the best shoe for you (suurrre…). 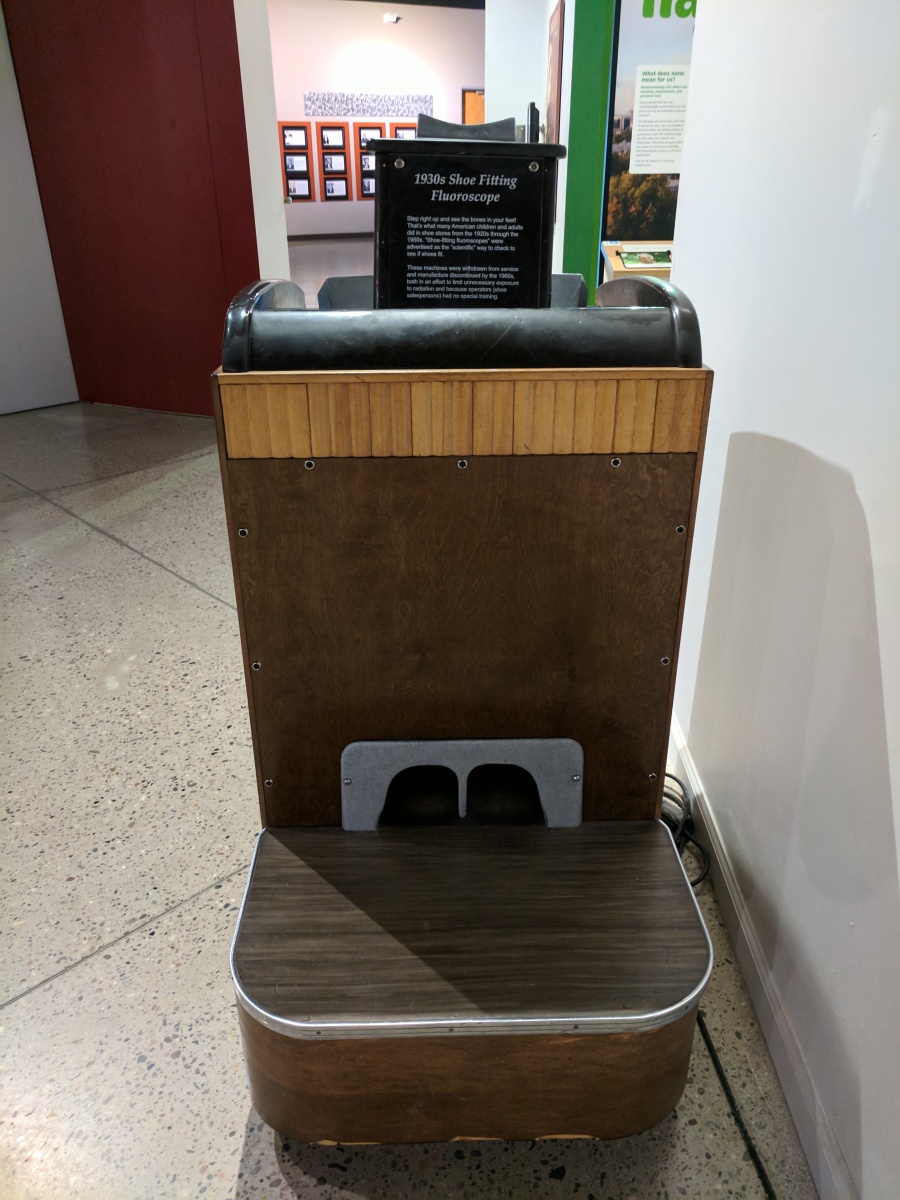 There also was a section showing the history of nuclear stuff in pop culture and showing how our culture’s experience with nuclear things has changed over time. 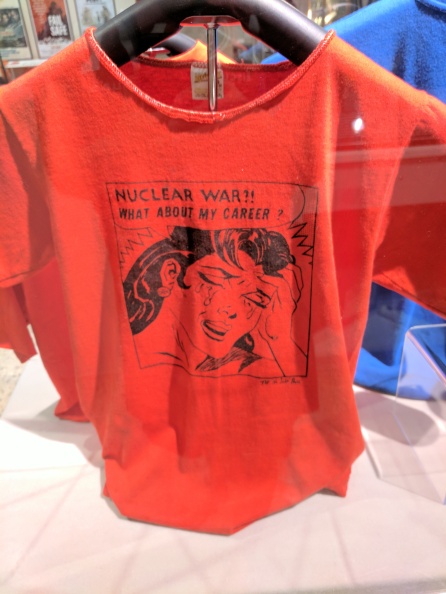 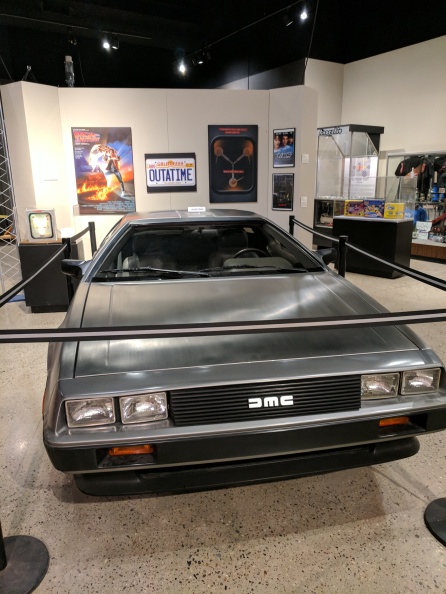 But the meat of where we spent our time was in the “bomb” areas. One of the most interesting areas was discussing the bombs used in Japan. They had a re-creation of both of the atomic bombs that were used (Fat Man and Little Boy) and a ton of information about the decision making process where we decided to use the bombs. 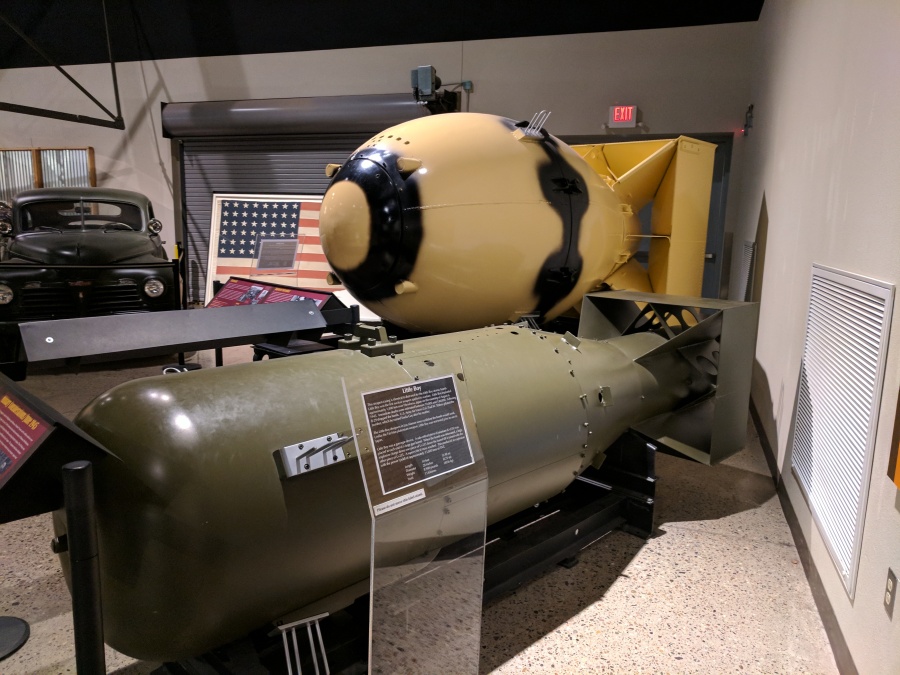 Some things I didn’t know: the bombs were originally built to use against Germany but the European theater was decided before they were finished. We only had the two bombs and the scientists only gave a 50/50 chance of them working. It was going to be months before another was ready. That made the options for deploying them very limited. We couldn’t use just one because it was assumed that people wouldn’t believe that we had more than the one. We couldn’t announce to Japan “hey look over there in the harbor at this time, where we’re going to drop a gigantic bomb that we’re choosing not to use on you” because if we did that and it didn’t ignite correctly it was assumed they wouldn’t be afraid of them. The Japanese Emperor was calling for “the Honorable Death of the 100 Million” as in, every citizen should fight a landing to the death. 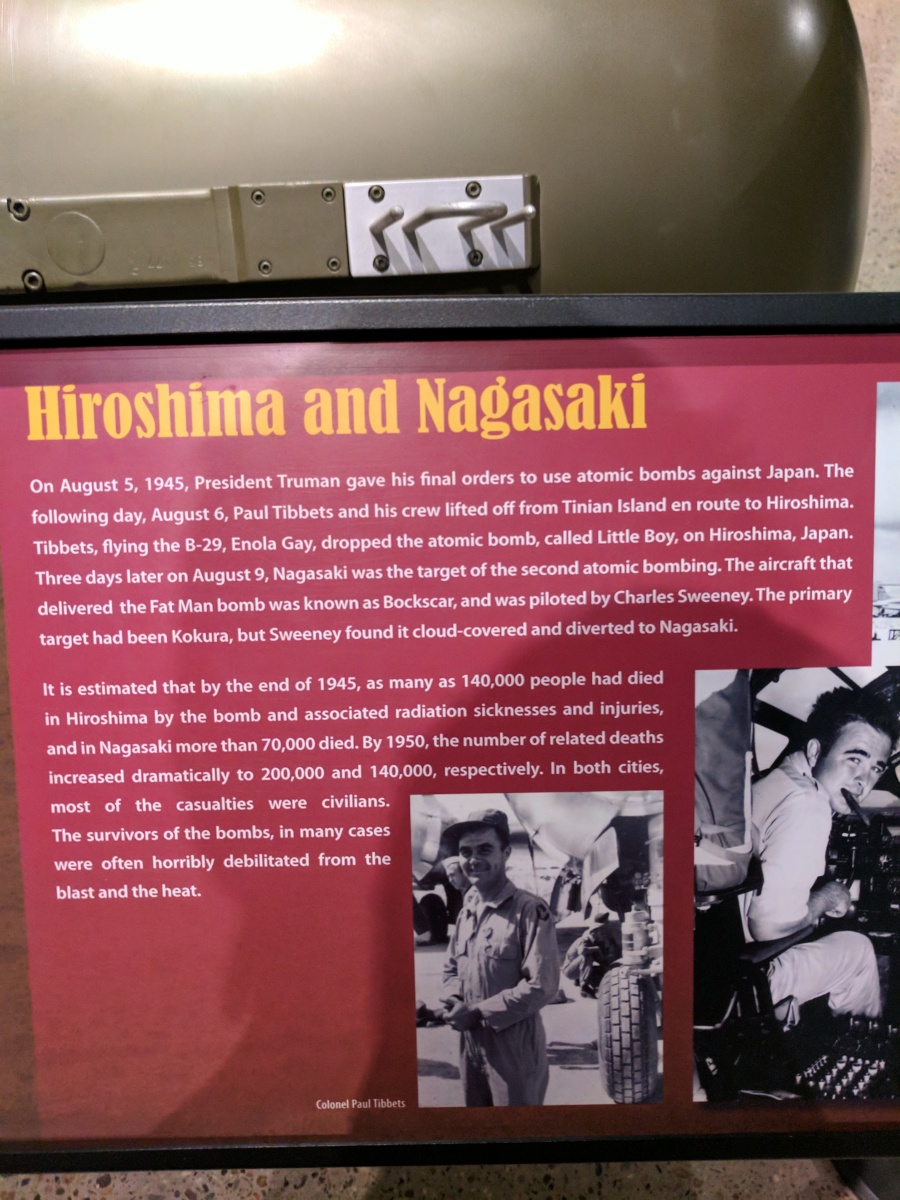 Overall, the museum made the impossible decision to use the bombs like we did, at least understandable given the knowledge of the people in charge. That said, the museum dedicated a huge area to discuss the after-effects of the bombs. There were diary entries from Japanese physicians, images of “blast shadows” where people were vaporized by the blast wave and left a shadow on walls where they blocked the heat. There was even a car license plate from Nagasaki. It was a very chilling and very sad display. 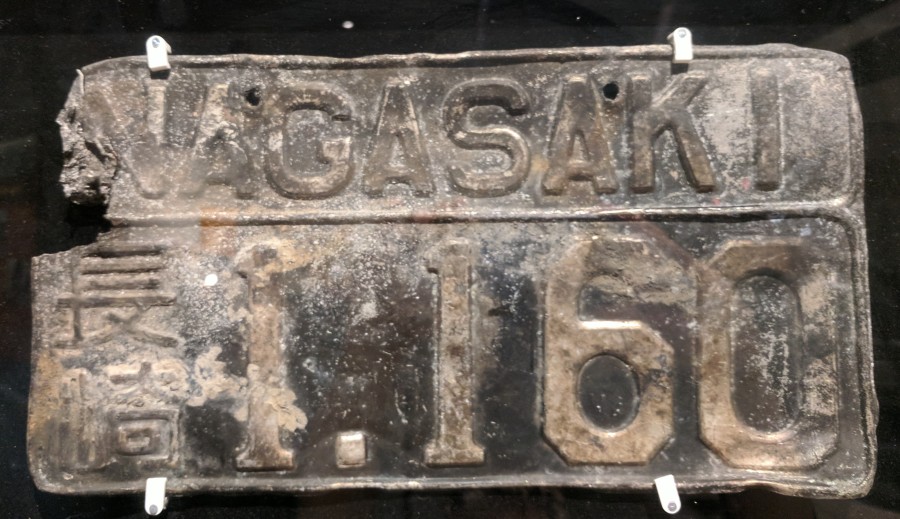 After that we passed into the Cold War area where we got to see the progression of nuclear weapons used by the US and Russian militaries: 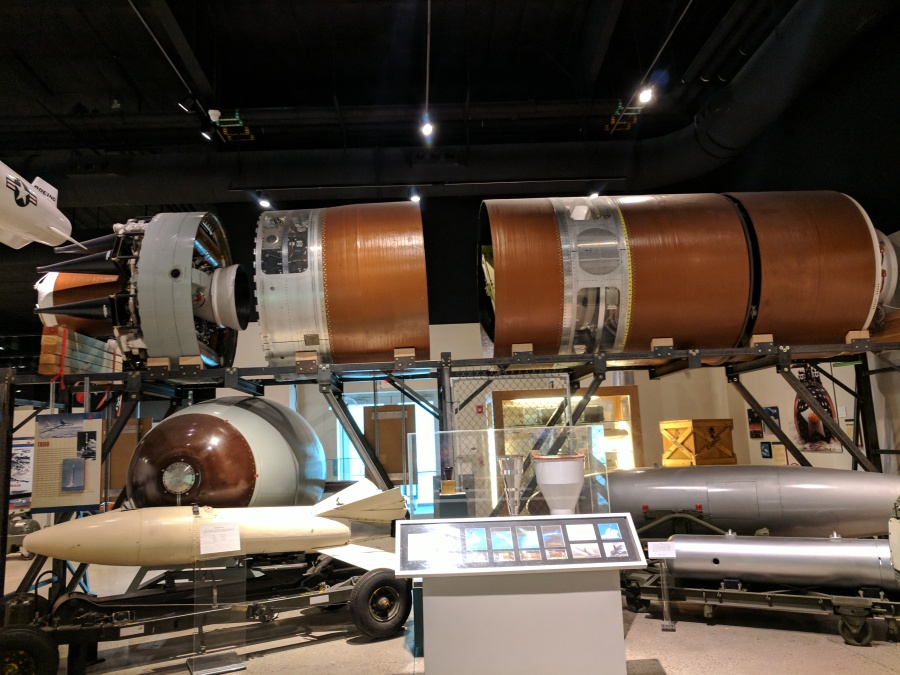 as well as some of the materials produced by FEMA and the Department of Energy for Civil Defense. Seeing as we were about two years old when the Berlin Wall fell it was interesting to see what the reality of life was for our parents and grandparents living through the Cold War. 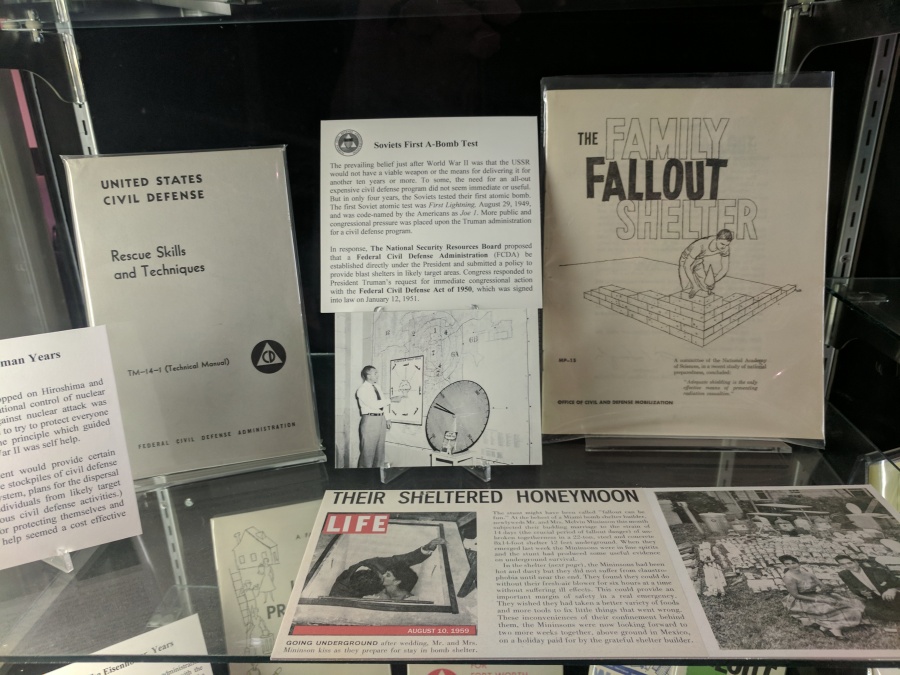 Among the military hardware on display, they had a progression of bomb designs including one the size of a bazooka shell that could be deployed by foot soldiers. They also had some “broken arrows.” Nuclear weapons that had been lost or damaged and thank goodness didn’t explode. They had 2 of the bombs that had been recovered after a bomber had crashed while mid-air refueling over Spain and dropped four bombs over the countryside and into the ocean. 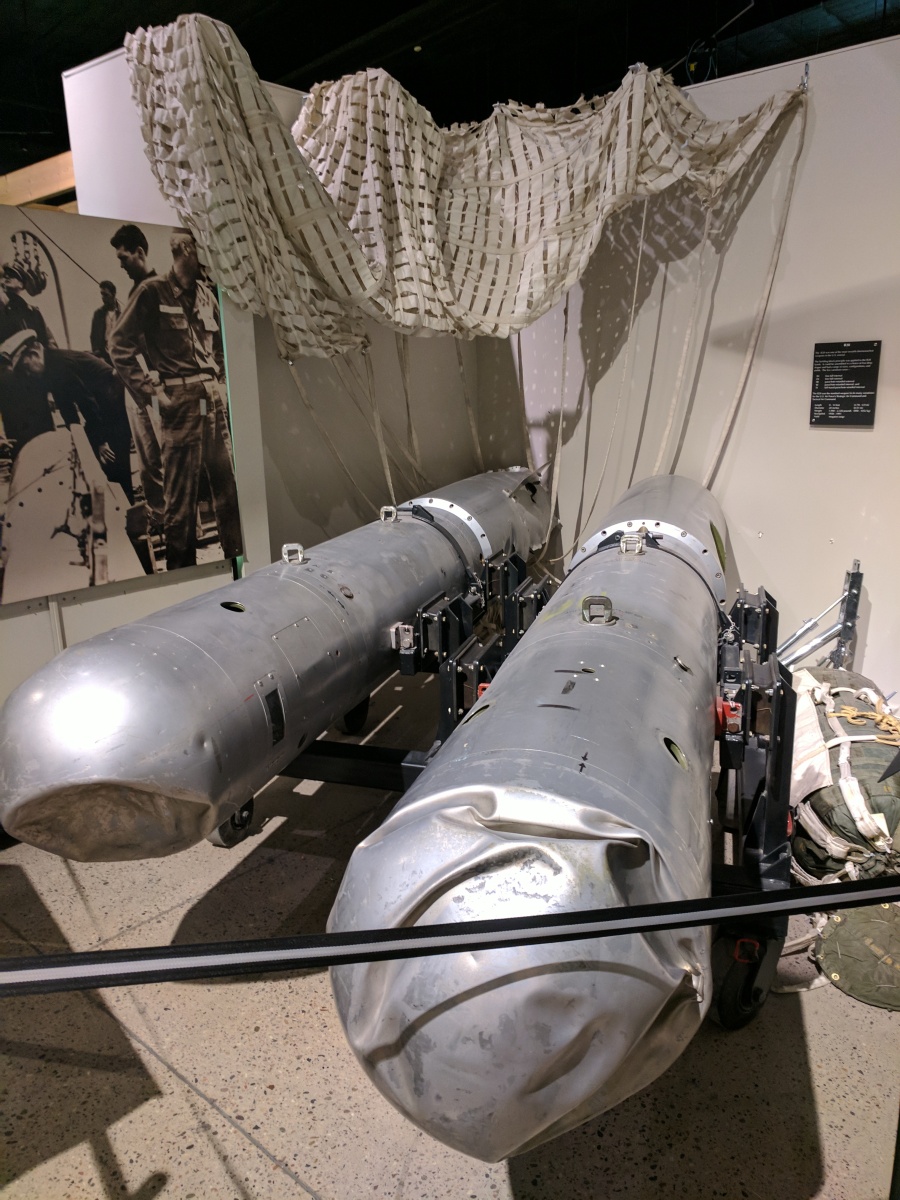 Lastly, we got to go outside to see the large pieces of their collection. I’ll let the pictures speak for themselves. 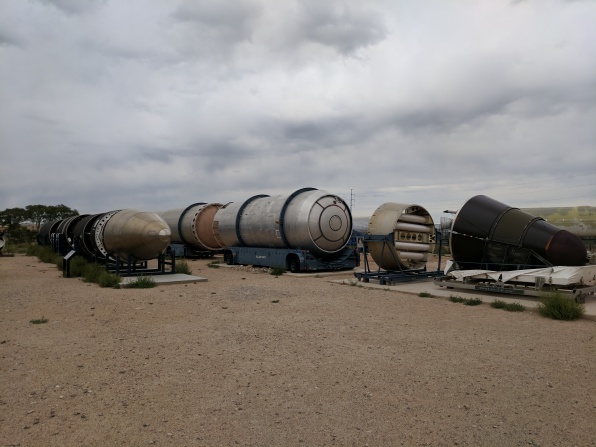 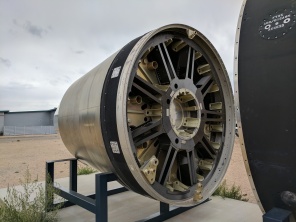 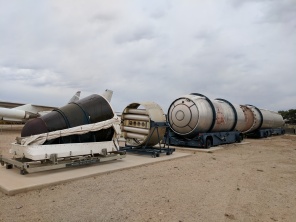 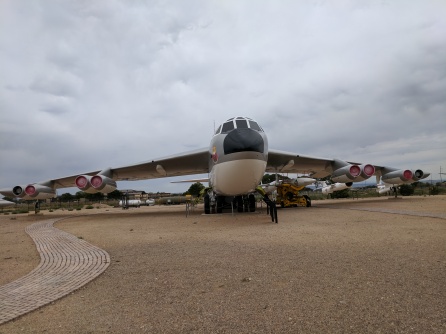 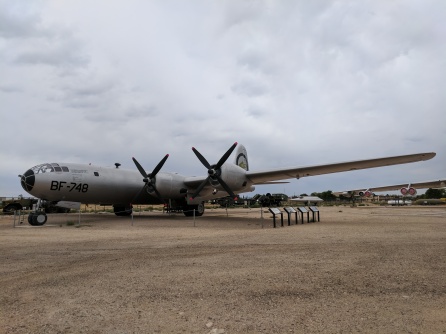 3 thoughts on “The National Nuclear Museum”

There was an error retrieving images from Instagram. An attempt will be remade in a few minutes.