Nik is being slow with his Telluride post so I am skipping him. Ouray! Ouray is in the Southwestern mountains of CO. It’s pronounced “YOUR-ay” and has incredible steep mountains on all sides. You feel like you are sitting at the bottom staring up in any direction you turn.

Prior to European-Americans settling in the region, Ouray was settled by the Ute tribe. In fact, the town is named for Chief Ouray. In 1876, the town was incorporated as a mining town. There were plenty of gold and silver mines in the area, as well as small mining communities that now exist as ghost towns or not at all. Ouray still has an “old West” feel to it that other mining towns like Telluride didn’t really have any more. There were some signs on the main street with diagrams of the buildings explaining what was there in the late 1800s, what they were used for, and what was built by 1914 or so. It was cool to see that some places, like the grocery store, had been used for that purpose for over 100 years. Many of the houses, too, had little date plates telling what year they were built. Most were from the 1880s! 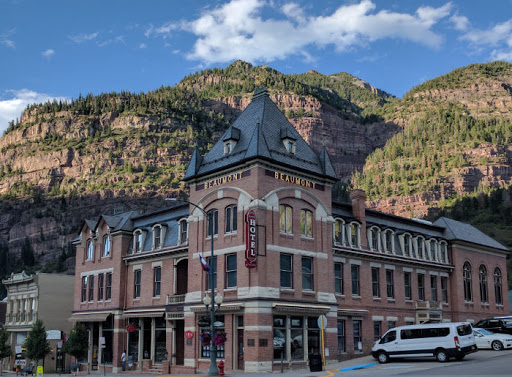 Now Ouray’s economy is based on tourism. The mines are no longer operational (though you can take tours of a couple). Jeep tours, ice climbing, backpacking, and hot springs are all popular here.

The town itself owns the biggest hot springs pool, though lots of hotels and such advertise them, too. The town springs had just finished a year-long remodel. They had water slides, inflatable obstacle courses, a full lap swim pool, and two different large soaking pools. There was even a pretty little koi pond with some HUGE fish in it.

Big fish in the koi pond

The hot springs were really nice, especially if you wanted to spend a long time there (at $18 each, you want to get your money’s worth) or work out and soak after. We were there July 4th weekend, so it was crowded, but we went after dinner and it wasn’t bad. It is high on our list of favorites for hot springs we have visited.

Ouray has one of the most unique hikes I’ve ever done. I mentioned above that the town is surrounded by mountains, so as you might expect, there are trails going off every which way to see various waterfalls and beautiful vistas. The town has constructed a trail that connects a lot of those cool sites and small trails together into one big loop. It has multiple trailheads to go in and out of town, so you can do all of it or just a section.

We used this to explore Box Canyon park one day and then on Saturday, we did the full loop. Box Canyon was neat- a big river (Canyon Creek) plunges underground and out through rocks at the bottom of the canyon. If you explore Box Canyon, make sure to stop by the Visitor’s Center and pay your entry fee- that’s how they maintain all those walkways high up in the air that you REALLY don’t want to give out! 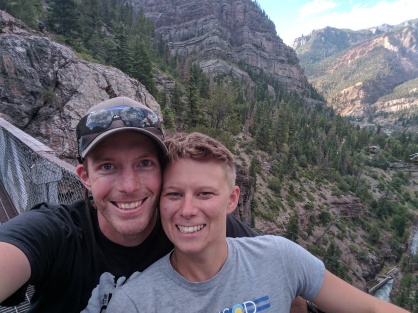 The Perimeter Trail Hike was somewhat hilly (total of 1600′ elevation change) and some sections are narrow, but overall it wasn’t too challenging. We did get stuck in a thunderstorm out there, which was a little scary! Luckily, we were below treeline and had rain jackets.

In addition to the stunning mountain views and views of the town, we got to see Cascade Falls,  Baby Bathtubs cascade, Box Canyon, and the Ice Park.

Million Dollar Highway is the route between Ouray and Silverton (and on to Durango). It is beautiful, but is full of hairpin turns with sheer drop offs. Of course, there is nary a guard rail in sight! We drove it to Silverton one day and took pictures along the way.

There are also old mines and houses along the way, which was neat. We ended up deciding it was okay to drive the RV across, and we did that a couple of days later (successfully, I should add). Nik took a video by attaching our GoPro to the RV mirror, so you can see a sped-up version of the drive for yourself:

We both really enjoyed Ouray and are already planning to go back!