I’ve spent the past two days being every preposition in relation to the RV. I think I now have a much better idea of what we got. Definitely will have a lot to learn but here is some of the good and the bad: 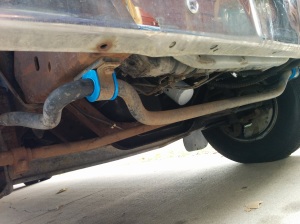 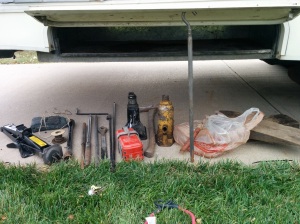 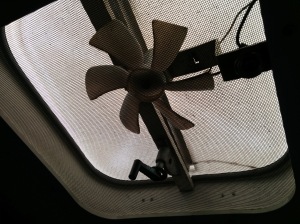 First off is that black cable and zip tie. The black cable is a cable for TV. It was strung so that the owner could set up a satellite dish behind the RV and string it to the input by the door. Fine. The problem though is that that cable was just draped underneath from one zip tie to another with loops hanging down low. This particular zip tie is connected to a water pipe. And, it was wrapped around the gas line. So if it snagged on something while we were driving down the road, we’d have a broken water pipe and a broken gas line. Fun stuff. It’s been removed.

Second problem is the ruffled paper in the bottom right. My only guess is that at some point, someone was having a very bad day. Their dog ran away, they accidentally spilled their beer, they got a bill in the mail and then the pipes in the back of their RV started banging together. So obviously the answer to the problem was to take the bill, envelope and all, and shove it under the RV between the gas and the hot water pipe. Makes perfect sense. Also, mostly removed.

So, that is where we stand now. We have a lot of changes/fixes/improvements to make but fortunately we have all winter. Step one is getting the water system winterized and sealing up the roof before it snows. Then we’ll go from there.